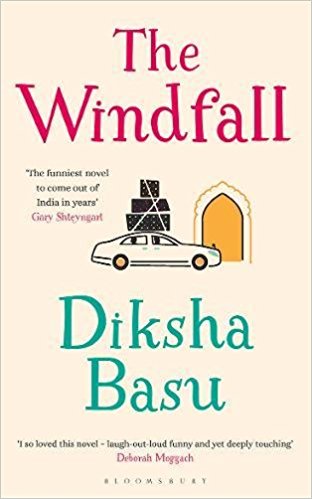 Okay, so I admit I bought Diksha Basu’s The Windfall because I love the cover. If I ever have a book cover with a customized illustration, I’ll have arrived for sure. I also love the font. The whole thing is fantastic. Also, Diksha Basu has this amazing write-up in the New York Times. It’s the coolest thing ever.

I brought this book on a day trip to Minneapolis last week and although it’s not a long flight to/from Chicago, it all passed so quickly because I was engrossed in the story as soon as I opened the book to the first page.

The Jha family is new to money thanks to Mr’s success with his start-up. After he sells his company for $20 million US, he and his wife move out of their middle class apartment complex and into a fancy development on the outskirts of Delhi. The Jhas’ only child and son, Rupak, is getting his MBA at Ithaca College–not Cornell, which they don’t publicize–and has a white girlfriend he’s afraid to tell his parents about.

The book is so funny, I laughed out loud on my flights and all week. The book is a quick read, but I spread it out as long as possible because it was so enjoyable. I’ve read that it’s comparable to Kevin Kwan’s books and I agree. Basu pokes fun of new money in India and the materialism and pressure young people suffer at the hands of their parents and society in India–even if these young people are studying overseas.

Mr. Jha is especially eager to one-up his new neighbor, Mr. Chopra. When the Jhas travel to New York to visit Rupak, Mr. Jha almost has a panic attack trying to relay to Mr. Chopra that Jha and his wife are flying business class. And when the Jhas are in New York, Mr. Jha buys tickets to Cats and takes his wife to Katz’s Delicatessen. Rupak can’t imagine how his dad would know about Katz’s and can’t think about that.

There are some endearing side stories, like Mr. Chopra’s heartthrob divorced brother who starts seeing Mrs. Jha’s widowed best friend. This generation all had arranged marriages, but now that Upen Chopra is divorced in his fifties and Mrs. Ray is a widow in her forties, they are experiencing the same kind of relationships of the younger generations.

The Windfall is my new favorite book of the season.