When my mom bought me a sari in India earlier this year, I immediately thought about turning it into a dress. After all, my mom had done the same in 1965 with a sari she bought on her first trip to India. So after inquiring around Chicago for several months and not finding anything, I put the idea on hold for a while. 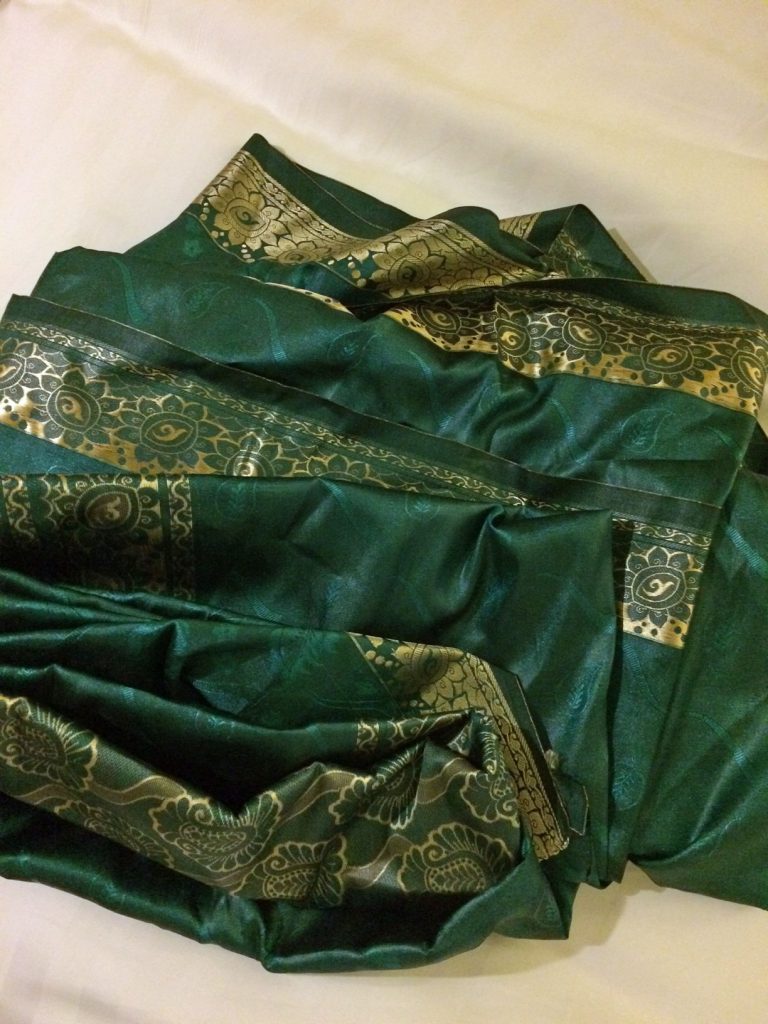 Until I traveled to Hong Kong last week.

Of course. Hong Kong would be a great place to get the dress made. Not only is the city renowned for its tailors (home to the 24-hour suit), but it also has many who are used to working with fabric from India.

So I set off on a mission and asked around for a recommendation. None of my friends in Hong Kong had had a dress or skirt made there, but some sent lists of tailors endorsed by the big magazines and newspapers there.

On a rainy day, I ventured with my friend Jennifer to Raja Bespoke Tailors just to get some quotes. I didn’t have the fabric with me because I was still at the comparison shopping stage even though I only had four more days left in the city. 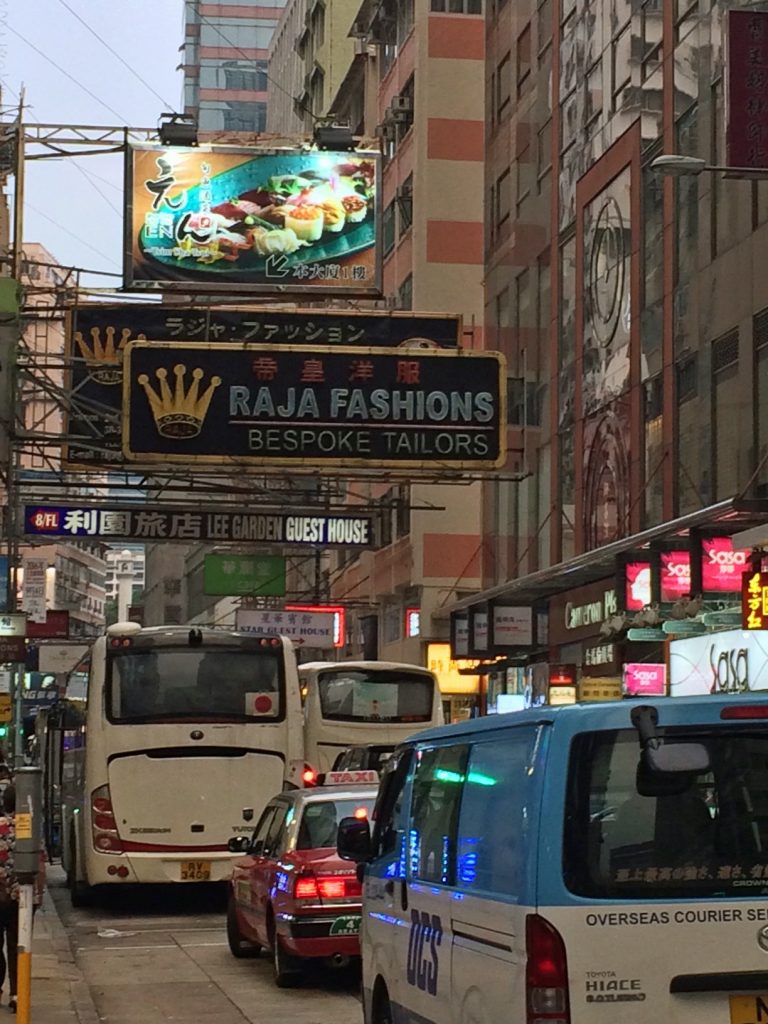 I told the salesman what I was looking for–a shift dress and matching coat–but the coat was going to end up costing a small fortune. So I changed it to a dress and a skirt. I figured I would wear the skirt more than a matching coat with the dress. The price dropped and I kept bargaining with Jennifer’s help. The next thing I knew, I was being measured. 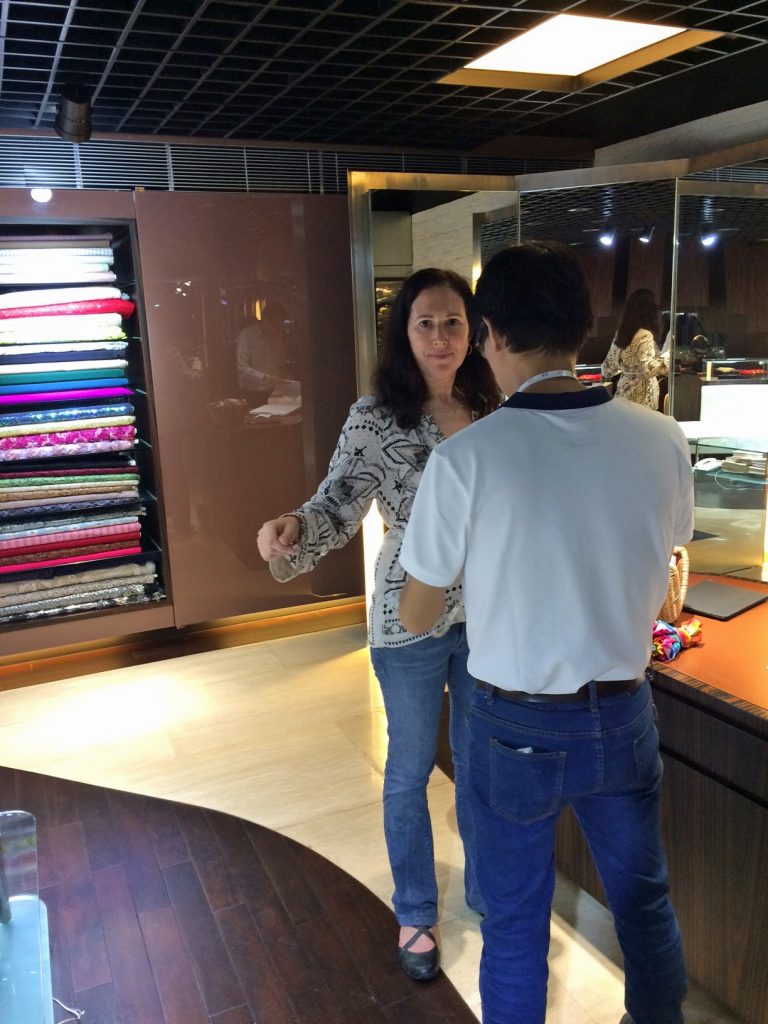 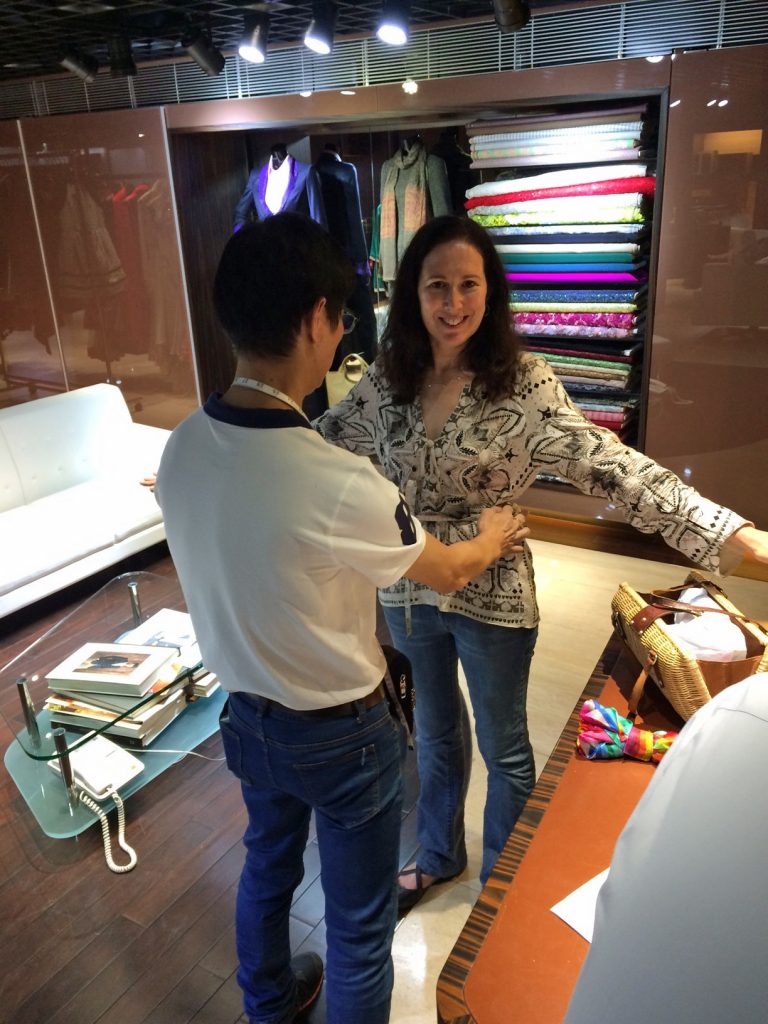 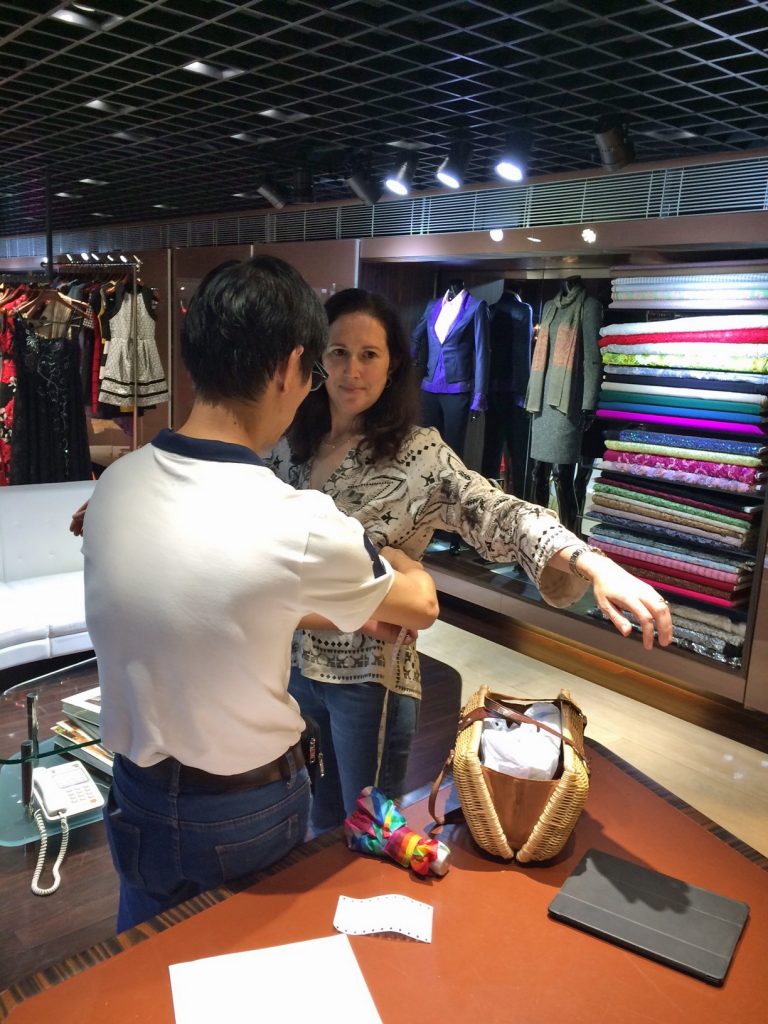 To get a head start on the clothes, the tailor wanted my fabric sooner rather than later. So they sent one of their guys with me to my hotel, which was close by. I ran upstairs and brought the fabric down to the tailor, who was waiting in the lobby. They wanted me back at 6pm that evening to try on the mock-ups. 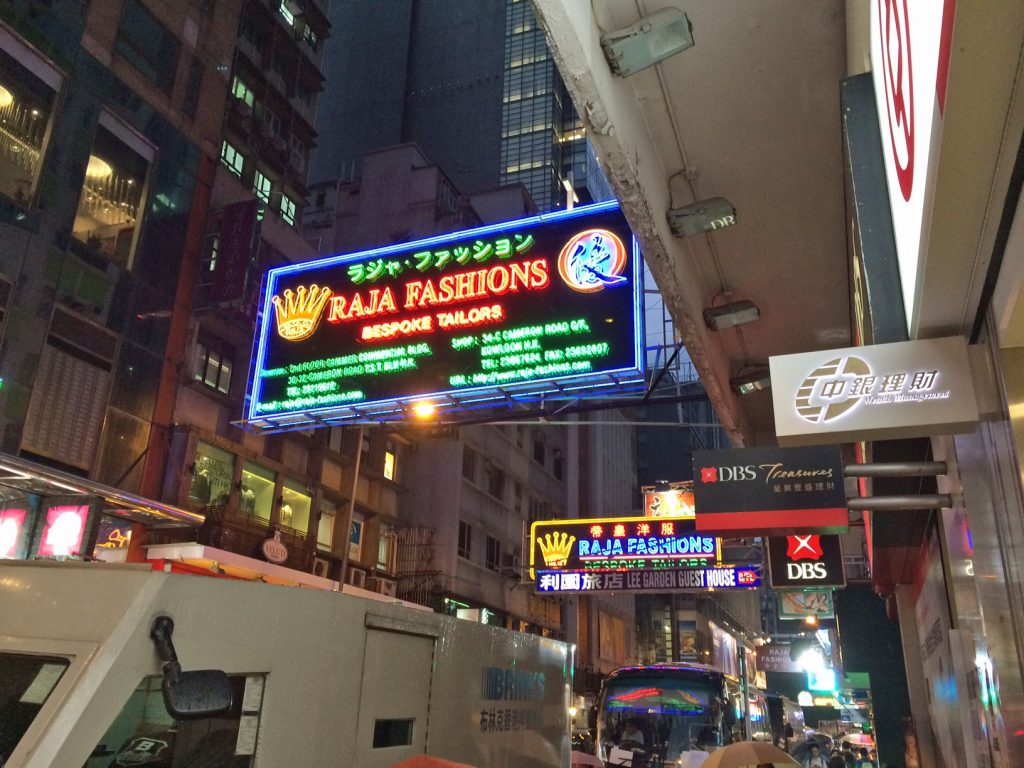 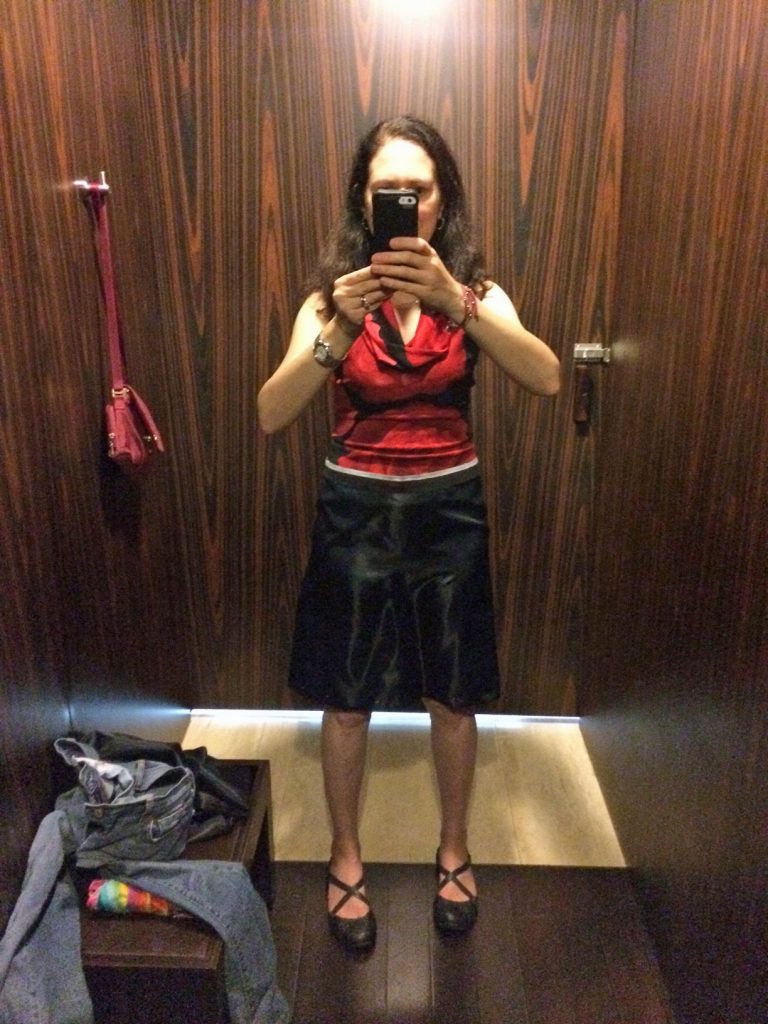 A few days later I returned for my fitting. Both the dress and the skirt fit, neither of which was tight in the slightest. But as I’ve learned over the years from having clothes tailored in Hong Kong, Vietnam, and Thailand, it’s better to be a little loose than too tight. 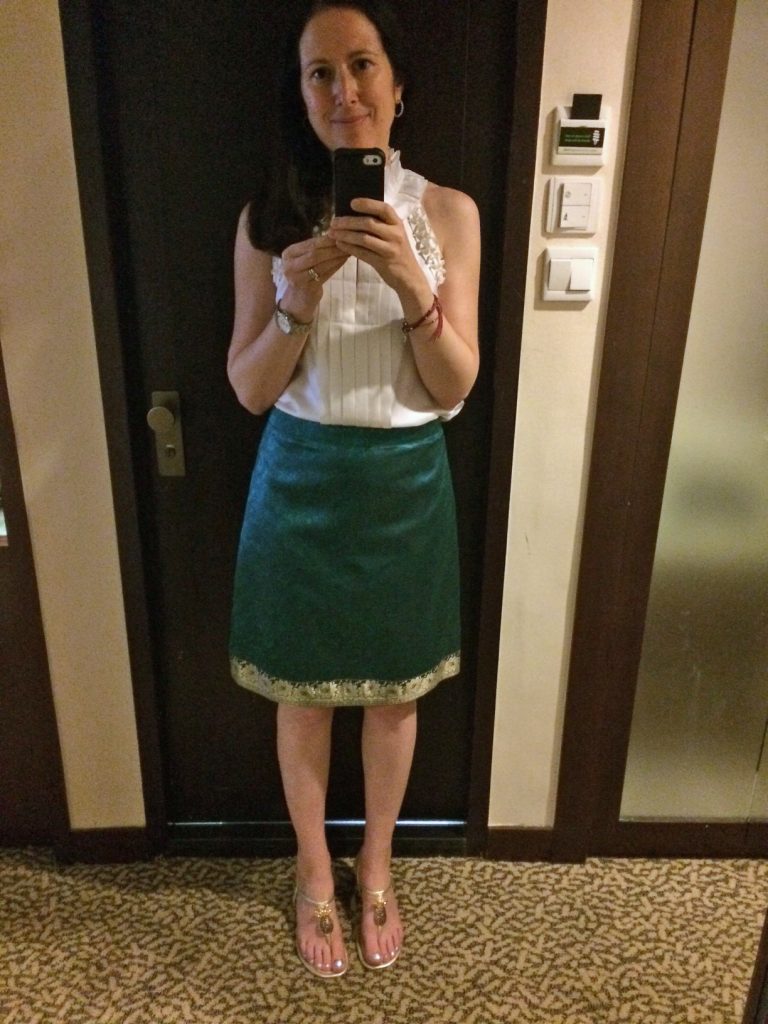 Even though the two pieces were not cheap, the experience was so much fun and the workmanship was great. Raja Bespoke Tailors travel to Chicago for a trade show every year and promised free alterations for life when they’re in town.

Have you had clothes custom-made? Where is your favorite place to have that done?