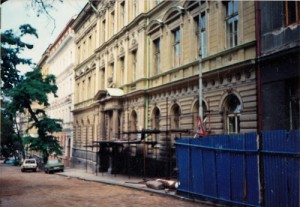 Some of my happiest travel memories have involved staying in an apartment (Moscow) or a room in house occupied by other travelers and the owner (Budapest). Or simply renting a room in someone’s apartment, as I did in Prague the summer of 1991.

I usually booked these rooms at a desk in the respective train stations.

It was weird at first to open the front door with the key I received at the train station. What if the people who lived there were in the middle of a party or in an argument?

But when I entered the foyer and peeked into the silent living room, I noticed the first bedroom and figured that was for me.

I stayed in Prague for several nights and never met the family living in that apartment. I heard them in the morning as I stirred awake, and again at night long after I’d turned in (I hurt my ankle in Budapest and was a mess by dinner time each day, so bought fruit in the markets and ate all my dinners in that room). From what I could hear, I think a middle aged couple and maybe one or two teenage children lived there.

Per my instructions at the train station, I left my key on the bedside table before I left for the airport on my last day in Prague. It was all a very trusting arrangement and one I won’t forget.