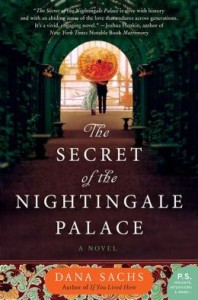 I’m so excited to review Dana Sachs‘ latest novel, The Secret of the Nightingale Palace (William Morrow, 2013), on her publication day! Congratulations, Dana!

From the start, I was swept away by this complex, heart-wrenching story. The chapters alternate between the present and the years surrounding World War II. In the present, Goldie Rosenthal, an octogenarian widow and her 35 year-old granddaughter, Anna, have been estranged for years, even after Anna’s husband dies from leukemia.

Since her husband’s death, Anna barely keeps afloat. It’s not just because she lost her husband, but also because his death causes her to reexamine her life and what she wants for her future. When her grandmother summons her out of the blue to New York, Anna skeptically obeys.

Goldie’s proposition: Can Anna drive her (in a swank Rolls Royce) across the country to San Francisco so they can return a collection of valuable Japanese prints to its rightful owner, an old friend whom Goldie hasn’t seen in decades? Anna agrees and feels obligated to return the artwork.

I love the grandmother-granddaughter story, but was also swept away by Goldie’s early years in San Francisco, after she left her modest means in Memphis and started over in the Bay Area. As Goldie and Anna make their way across the country–with an unexpected stop after Goldie suffers a fall and needs to be hospitalized for tests and observation–Anna learns bits and pieces of her grandmother’s fascinating background.

As in her previous books, Dana Sachs explores multicultural relationships in The Secret of the Nightingale Palace. I first learned of Dana’s work when I read her memoir, The House on Dream Street (Seal, 2003), on vacation in–where else–San Francisco. Just as in her memoir, her new novel is full of thrilling surprises that keep the pages turning.

I won’t spoil the end, or even the middle, but as I was finishing the book, I had to stop reading so I could continue later when my kids were at school. I was afraid I’d frighten them with my tears. But even when I reached the end, I needed to take small breaks to stifle my sobs.

The Secret of the Nightingale Palace touched on so many issues dear to my heart (intercultural relationships, familial expectations, Jews in the South, and Asian art and architecture), but it’s also a gripping story of love, loss, and survival.

And how a propos that this novel about marriage and grandmother/granddaughter relationships comes out today, which is both my grandmother’s 97th birthday and my wedding anniversary!