Our man in Tianjin is on holiday in Australia over the long lunar New Year break. He and his wife Ellen visited a place I had never heard of before. And because I love off-the-beaten-path stories, I’m super excited to feature Stuart’s write-up of this fascinating excursion. Stuart’s author and food podcasts can be found at http://rastous.podomatic.com. Here’s Stu!

Robe is located on South Australia’s magnificent Limestone Coast, roughly a third of the way from Adelaide to Melbourne – and well worth visiting for so many reasons. 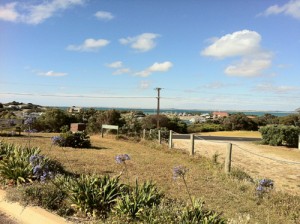 For those of you with a bent for all things Chinese, Robe was one of the major landing points for migrants coming from the Mainland during the Goldrush period in the Nineteenth Century. At the time there was a “landing tax” on Chinese of Five Pounds per person (an awful lot of money) for those coming ashore in Victoria.

Enterprising captains docked their ships in Robe instead to avoid the fee – never mind that it’s an incredibly long walk overland to the Ballarat and Bendigo fields! There’s still a bilingual plaque on the landing spot, but the mural that decorated the outside wall of the Public Library has recently been removed… which was very disappointing!

What wasn’t disappointing was the local food. Robe is in the centre of one of the best food production areas in the world, spanning everything from crayfish (lobster or lung shar, depending on where you’re from), through Waygu Beef, to saltbush mutton and on into wine, coffee and even artisan cheeses. 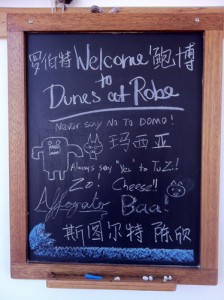 We had the very great fortune to meet Maria Gentile, whose Caffe Belgiorno takes full advantage of all these beautiful, fresh ingredients in designing its menu. While we were there, we tried two different types of pizza, one of which (The Marinara pizza) had won the National Pizza Award not long ago. 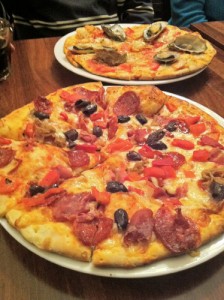 It featured fresh mussels and oysters still on the half shelf, as well as fish and smoked salmon, and was just stunning.

After the pizza, Maria introduced Ellen to the affogato, which is Italian for “drown”. A big scoop of fresh vanilla ice cream arrived in a Martini glass, flanked by a shot glass each of espresso and Bailey’s liqueur, which were then poured into the ice cream to “drown” it.

It must have been good, as Ellen talked me into making it for her again for breakfast a few days later!

Speaking of breakfast, we returned one morning to Caffe Belgiorno to try their breakfast menu. I’d made French Toast for Ellen in the past in China, but how can I compete with beautiful, thick cut locally baked bread, topped with lemon curd, berries in syrup and ice cream? 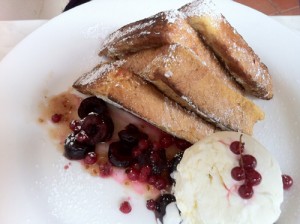 Being a big chap, I opted for the Big Breakfast, which featured locally made thick pork sausages and smokey bacon, fresh picked tomatoes and free range eggs, with mushrooms over crusty sourdough toast.

To tell the truth, I struggled to finish it, but it was just waaaaaaaaaaaaaay too good to leave any trace of it on the plate! 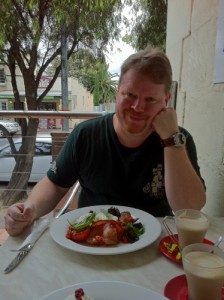 On the way out of Robe, we dropped into Mahalia Coffee, which roasts and grinds what is arguably the best coffee in the world (and yes, I am looking at you, Starbucks, for undermining what people perceive as quality coffee). Unfortunately, Mahalia herself was in Adelaide, but we did stock up on Number 1 blend to take back with us to China.

Ellen and I split a Trucker sized Latte in the back of the car, along with an excellent pecan tart, as we headed along the Coorong, past the jet black Angus cattle, and back to Adelaide.

In February Stuart and Ellen will spend a couple of days in Hong Kong. Stay tuned!