Today I took two little my kids into Chicago for a special treat: lunch at the Peninsula. (Number one son was toiling away at high school.) Last winter we met my sisters-in-law there for lunch and had such a fabulous time, we decided to make it a tradition. Normally I stay home in the afternoons because my youngest still naps. So I wasn’t sure how the afternoon would pan out.

When we arrived, they were super excited to see the stone lions outside the Peninsula. 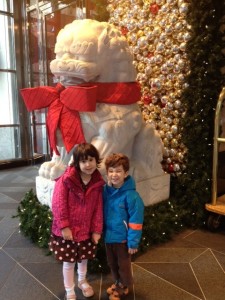 We ate in The Lobby, modeled after the lobby lounge in the Hong Kong Peninsula. 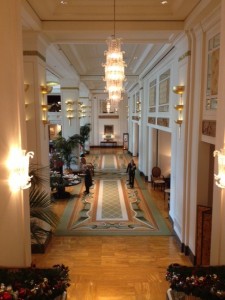 If you look over the doorway, there’s a little balcony where musicians perform during afternoon tea. Hong Kong’s Peninsula has this balcony, too. 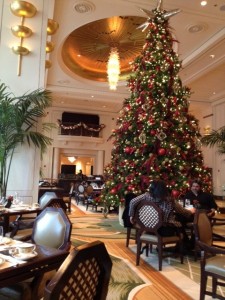 With its origins in Hong Kong, the Peninsula is known for its service. The waitstaff catered to the kids and boy did that make a difference. The kids were greeted at the table with special cups of water, sticker books, and boxes of crayons. 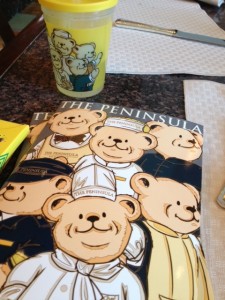 Here’s Martin working on his. 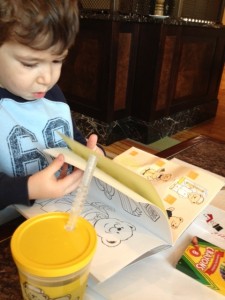 The contents of the book epitomized east meets west. Check out these bilingual stickers. That’s Tai Chi Bear on the upper right.

The food was delicious. I ordered the kids mac and cheese from the children’s menu, which I try to avoid. But in this case it made the most sense cost-wise. (Both kids devoured my desserts, which were created for the adult palate.) 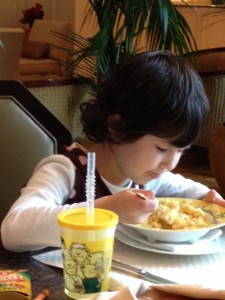 After lunch and multiple trips to see the tree, we took a couple of side trips. Rachel and I made a bathroom stop and hit up the gift shop, which to my surprise, sold small items from Shanghai Tang. On our way downstairs to find my sisters-in-law and Martin at the piano, a kind man offered to take our photo. 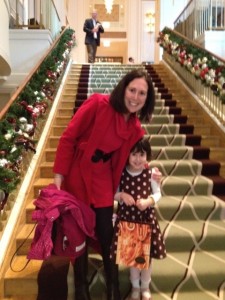 Just down the stairs from The Lobby is Shanghai Terrace, the poshest Chinese restaurant in Chicago. It’s been years since I’ve been there, so maybe I’ll make it back one of these days. 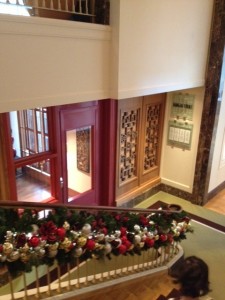 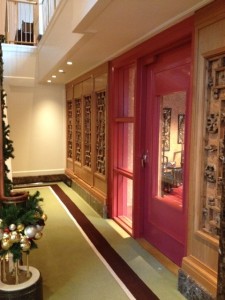 Here are the kids in front of Shanghai Terrace for a parting photo before we headed back home. (They are each holding a small stuffed pig I bought them at the gift shop. The price was extremely reasonable, considering they were sold alongside hundred dollar Shanghai Tang cuff links.) 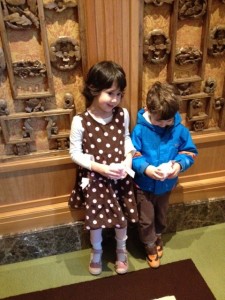 We all spent a delightful afternoon at the Peninsula. The kids surpassed my expectations and have earned another trip back to the Pen next winter!