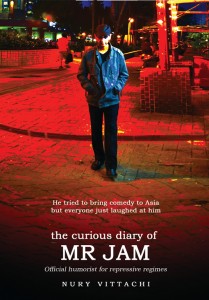 Nury Vittachi was a household name when I lived in Hong Kong. I first came across him through his South China Morning Post column called Lai See. Friends who were deeply involved in the Hong Kong publishing world were on a first name basis with him. No matter how one knew of Nury Vittachi, it was a given that he was the funniest person in Hong Kong.

So I was excited to read his latest book last week, The Curious Diary of Mr. Jam (Blacksmith Books, 2012). Vittachi has gone by many names: Lai See, The Spice Trader, Sam Jam, as well as his given name. The Curious Diary is a fictional account of Vittachy’s quest in 2008 to find humor in Asia.

Early in the story, Sam Jam (the name he goes by in this book) is let go from his columnist job at a prestigious international newspaper. For someone who wrote a humor column, Sam found it frustrating that his submissions were slaughtered by an editor who had no sense of humor. This and other experiences led Sam to embark on a journey to find humor in Asia.

Sam Jam has an agent who books him speaking engagements throughout Asia. Partway into the book, she fires him, too. On top of that, his elderly mother in England asks Sam to buy her home so she can live there and he and his family can have it after she’s gone. He starts to feel overwhelmed about raising money to buy this home because he doesn’t have steady income.

He meets daily in his office at The Quite Good Noodle Shop on Electric Road, where the owner and patrons lend their advice. One suggestion is that Sam should start a blog. So at The Quite Good Noodle Shop, he fires up his computer and begins his blog at www.mrjam.org. Excited to find his first few readers, he clicks on the comments and learns that they came from spambots.

But regular readers begin to leave comments, and Sam engages with them about humor in their countries (China and Singapore, to name a couple). He even meets some of his readers and ends up learning as much from them as they learn from him. Speaking at government meetings in Singapore and China is no easy feat, but Sam Jam delivers. Sometimes his attendees have no reaction, as they did in Japan, while other times they nod their heads without laughing (India).

Through trial and error, Sam Jam learns what kind of humor works in which circumstances. Someone told him not to talk about sex in India, but it’s okay to joke about marriage there.

What I found to be the most fascinating part of the book is that the very people you would expect not to have a sense of humor were the ones who shared the funniest jokes.

I enjoyed this book and Vittachi’s self-depricating humor. People who know of Nury Vittachi as well as those who don’t should enjoy this unique look into humor in Asia.