I’m thrilled to interview Hong Kong-based writer, Shannon Young. Her blog is one of my favorites, and I’ve found so many similarities in our China and Hong Kong experiences. She and I both traveled to Beijing with our fathers when we were in college; we both moved to Hong Kong soon after college; and our parents and grandparents both spent time (hers longer than mine) in Asia, including Hong Kong. And we’ve both written memoirs set in Hong Kong (hers more than mine). If you missed her guest post here earlier this week, check out this link.

Susan Blumberg-Kason: I find it fascinating that your grandparents lived in Hong Kong in the 1950s and 1960s, your father was born there, and you ended up there not entirely by your own doing. Given your family’s background, had you ever thought about a future in Asia, or in Hong Kong to be specific?

Shannon Young: When I was growing up, my dad always talked about moving our family to China. He loved his childhood in Asia, and he wanted us to experience it too. It was a possibility that came up now and again, but didn’t work out while I was living at home. For me personally, I had always been more attracted to Europe and especially England. I studied in London for six months and I hoped that was where I would end up. But while I was in London, I fell in love with a man from Hong Kong. When he moved back for work, it didn’t seem like an impossible idea that I might be able to make a life there like my grandparents did over 50 years ago. I visited him in Hong Kong and fell in love with the city too. I felt like I was connecting with my own family’s roots and not just moving into his life.

SBK: So when you decided to move to Hong Kong, do you think your parents were more understanding than the average American mother and father because your father’s family had a long history in Asia? Did your mother and father have different reactions to your decision?

SY: My parents took it in stride. For them, the idea of living abroad for a few years or even choosing to make a permanent home outside the US wasn’t unusual. My mother also lived in Taiwan and the Philippines as a young girl, so even though she’s comfortable and happy in America it didn’t surprise her. My older sister had been living in South Korea for over a year by the time I moved to Hong Kong, so I wasn’t the one to blaze that trail.

SBK: I’ve seen on your blog that your mother has visited you in Hong Kong and you’ve had a blast touring the territory together. Has your father visited you there, and if so, did he bring you to places he had heard about through his parents?

SY: My dad occasionally goes to China for business, and once he was able to stop in Hong Kong for the weekend. He was five years old when his family left, so most of his memories are actually from later visits. He hadn’t been back to Hong Kong since 1994, so that weekend was more about me showing him some of the new things that he wouldn’t have seen, such as the Big Buddha on Lantau Island and the Soho Escalator. I have been able to drive past his old street near Stanley and Matilda Hospital where he was born. My mom was in Hong Kong for a bit longer, so I got to take her to those places as well. I’m sure my dad will be back again and hopefully we’ll have a chance to head over to the south side of HK Island.

SBK: Can you talk a little about your very first impressions of Hong Kong?

SY: My first visit was in the fall of 2009. I arrived in the evening and I remember the sense of exhilaration as I rode the Airport Express toward the city lights. It felt like I was flying into a space station in a Star Wars film. In the taxi, we drove through the winding streets and into Midlevels past futuristic buildings and historic structures like St. John’s Cathedral and the Helena May. I love the mix of old and new, and I could tell it was a special place. That week, I spent a lot of time wandering through the streets and admiring the bustling old-fashioned markets that were sometimes directly beneath the tallest buildings I’d ever seen. It’s a city of contrasts, and I found that very appealing from the beginning. 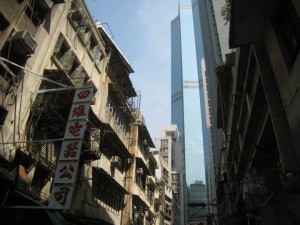 SBK: When we met in Hong Kong, you showed me the café where you write. But how do you find the time? Between your teaching job, blogging several times a week, exploring Hong Kong for your walking tours, and reading, when do you fit in writing?

SY: Unlike the busy year when I taught in the US, I don’t typically have to take any work home with me, so I can write in the evenings. I like to go to the coffee shop on the weekends and every Tuesday night my writers’ group meets there too. Sometimes we critique each other’s work and sometimes we just write with company. I also use the spare time at work, such as when my students are taking exams, to get in some extra writing time. It’s a relatively new passion for me and I’m trying to learn everything I can about the craft.

SY: I love the energy of the people around me. All of my friends made the decision at some point to chase the opportunities and adventures in Asia. We’re all in the best time of our lives so far, so the optimism is infectious. I do miss being able to hang out with my family. I have eight siblings, and we like to have barbecues and talk in the kitchen of my parents’ house. I also miss driving down the wide-open highways in Arizona and eating Reese’s Pieces, the only American food that is difficult to get here.

SBK: What advice would you give to someone who is thinking about moving to Hong Kong from abroad? Is there anything you wished you’d known before you moved to Hong Kong?

SY: If you approach life abroad as a great adventure, it will help you to alleviate some of the frustrations of getting used to a new place. It’s hot, crowded and polluted here, but on the bright side, everything is air-conditioned and we’re only a short flight away from several island paradises. For people with kids, it’s absolutely essential that you research the school situation before committing to a move. It’s very competitive to get places at English-speaking schools and the fees are high. I also recommend taking Cantonese. You don’t need it to get around, and I’ve met expats who’ve lived here for 20 years without learning to say anything more than their address, but there are better reasons to make the effort. I am the only foreigner working at my school, and I’ve found it helps me to connect with my co-workers even though my vocabulary is woefully limited. Their English will always be better than my Canto, but they appreciate that I am making the same effort to learn their language that they made to learn mine. Mostly, we talk about food.

SBK: Who are your favorite authors?

SY: I’m a huge fan of Peter Hessler. He writes about China with such humility and clarity. I got to share a taxi with him when he spoke in Hong Kong last year and he was so nice in real life. I also love Fyodor Dostoevsky. He wrote such rich stories that you can feel in your bones. I taught a discussion class in the US in which we read Crime and Punishment and it remains one of my favorite teaching experiences. I also admire Bill Bryson, Erin Morgenstern, J.K. Rowling, and Susan Cain and I’m still in mourning for Robert Jordan.

SBK: Which books are in your Kindle waiting to be read?

SY: I just started Love at the Speed of Email by Lisa McKay. Peter Hessler’s latest, Country Driving, is in the queue along with Memoirs of a Gas Station by Sam Neumann, Vanity Fair by William Thackeray, The Great Typo Hunt by Jeff Deck, and When the de la Cruz Family Danced by Donna Miscolta. The book you gave me, Petals from the Sky by Mingmei Yip, is at the top of my physical to-read pile.

SBK: Finally, where do you plan to watch the opening ceremony of 2012 London Olympics?

SY: I’ll be in Oregon at my grandparents’ home. Their house is filled with the mementos of their 35 years in Asia. You can walk from room to room and see Buddha statues from Thailand, Chinese folding screens, dishes from Korea, and textiles from the Philippines. My cousins and siblings and I will no doubt make a big event of watching the ceremony together. Still, I’ll be thinking about London and imagining how electrifying it would be to be there in the stands.

Thank you so much for the great questions Susan and for supporting the launch of my e-book! 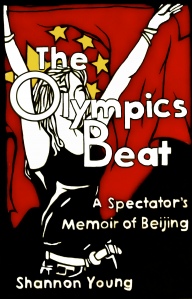 SBK: Thank you, Shannon, for this wonderful interview. I can’t wait to read more of your work. Happy writing and enjoy the London Games!