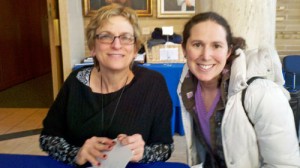 On Sunday morning I drove over to historic Oak Park, Illinois, the former home of Ernest Hemingway and Frank Lloyd Wright. I went to Oak Park to hear Author Anita Diamant speak before a full crowd at my synagogue, Oak Park Temple.

I’d first heard of Anita Diamant in the late 1990s when my mom went to hear her read from her debut best-selling novel, The Red Tent (Picador, 1998). She’s not only a novelist, but huge in Jewish communities around the US for her non-fiction life-cycle books, or what she calls Jewish guidebooks.

Diamant started out as a journalist in Boston and when she and her non-Jewish husband were engaged to be married, she found few resources for people who wanted a liberal Jewish wedding, ie, when one partner has converted or isn’t Jewish. So she wrote her own book, The New Jewish Wedding. From there she went on to write five more guidebooks.

She spoke on Sunday about writing, liberal Judaism, women, and mikvahs, the Jewish ritual bath. From her journalist background, she is a deadline writer. Her next novel is due on December 1, so while she tries to write every morning after walking her dogs, she knows she’ll be very busy come September.

Diamant discussed her writing group, which she highly recommends for all writers. She has a core group of three, with others coming and going.

One member of the audience asked what kind of books she enjoys reading. Diamant replied that she reads books for research, best sellers, recommendations from friends, and poetry. When she’s writing historical fiction, she doesn’t read contemporary fiction.

Another congregant asked for tips about breaking into publishing now. Diamant said it’s quite difficult to find an agent and publisher, but with the internet, e-books, and self-publishing, writers have more options than ever. She also said there are more Jewish voices in literature now than in the past and that memoir is an important genre because in our fast-paced society it’s good to slow down and read about people’s experiences on a deep level.

After an hour, she signed books and chatted with congregants. She even stopped to pose with enthusiastic readers. What a nice way to spend a Sunday morning.