This week I read a fascinating e-book. It’s the first book I’ve featured as a Book of the Week that’s only available as an e-book. Thank goodness I have a Kindle. 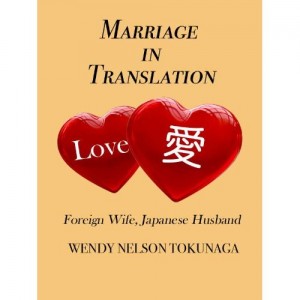 Wendy Nelson Tokunaga wrote Marriage in Translation (2011) as a follow up to her novel, Love in Translation (St. Martin’s Griffin, 2009). Both center on relationships between western women and Japanese men.

Her new e-book is a quick, yet substantial read. She profiles fourteen couples, including her own marriage. The women come from the US, Australia, France, and England and the men are all ethnically Japanese.

Some common themes abound in the book. Most of the women studied Japanese in college or taught in Japan before they met their husbands. The Japanese in-laws are central to many of these relationships, both in positive and negative ways.

But what stood out most was that all the women have a fierce independent streak and a strong sense of identity. They’ve adapted to Japanese customs well, but haven’t tried to be Japanese. It’s not only fascinating, but probably the reason these marriages have worked out so well (with the exception of one, which dissolved well before the book was published).

So even if you don’t have a multi-cultural relationship, you’ll get a lot from this book. No matter your background (or your partner’s), it’s best to stay true to yourself and not try to be someone you aren’t.